May 08, 2011
Us girls love a good ritual.  Go on, be honest, you enjoyed that wedding last week.  In fact, you like weddings in general, and anniversaries, and I've heard it said, and I think they might be right, that without women there would be no Christmas.  We like to create and participate in ceremony, to gather with friends and family to celebrate life, love, and the passage of time together.  Men can happily join in, but essentially, it's a girl thing.

You'd think then, that there would be more woman centred rituals (or call them gatherings, parties, celebrations, rites of passage, whatever you feel comfortable with).  There are, however, many significant moments in a woman's life that are left unremarked upon by our particular culture.  From menstruation to menopause, our bodies do some mysterious and amazing things, and in many other far flung corners of the globe, these accomplishments are brought to light and celebrated in a variety of imaginative, touching and life-enhancing ways.   Not so for we Brits, who tend to feel awkward asking for a second biscuit, let alone a public declaration of anything really big or emotional.

But there are some lesser known celebrations of female rites of passage already quietly taking place.  I recently heard about one such ritual for pregnant women known as a Blessingway.  Now, I know your Tie-Dye and Mung Bean Alarm is already sounding, but stay with me if you will.  When I told my partner about this ritual, and that I liked the idea so much I thought it worth getting pregnant again just so I could have one, he diplomatically reminded me that it might be a 'bit too hippy' for your average folk.  My response, equally diplomatic of course, was to remind him that he had never had to perform the seemingly impossible 'camel-through-the-eye-of-a-needle' trick of childbirth, and that if he ever did, he would no doubt soon be happily begging any available wizard to sprinkle him with fairy dust. 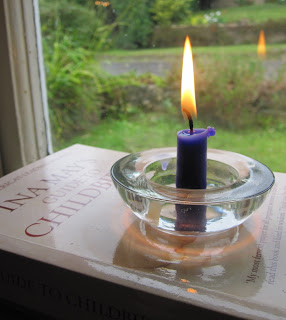 So, a Blessingway...it takes the place of the more conventional 'Baby Shower', in that a group of close female friends gather together with the pregnant woman shortly before her baby is due.  Each guest brings something positive for the expectant mum - this could be a poem, an empowering birth story, or anything meaningful or helpful.  Every woman also brings a bead with her, and at the party these are strung together into a necklace or bracelet to be worn by the pregnant woman during labour.  Each guest also ties a red thread around her wrist which she wears until the baby is born, to represent her connection to the birthing woman.  And when labour begins, the pregnant woman contacts each of the women who have attended the Blessingway, and they all light a candle for her in their own home to show their affinity with her while she is birthing her child.

But, once the baby is born, there don't seem to be any commonplace rituals for the new mother and child.  We might choose a conventional Christening to welcome the new life and celebrate our birthing achievements.  But if, like many people now, we are not particularly religious, there is nothing to replace this event, and after a few champagne corks have popped and we have had our Six Week Check, we often drift into our new lives as mothers without further ceremony.

Of course, the great thing about ritual is that you can easily create your own.  All you really need are two simple things: an activity that feels meaningful to you, and a declaration - inward or outward - of intent.  When my first daughter was born, we were given a tree as one of the new baby gifts, and as we planted it on a rainy January day it felt quite meaningful.  It is nice to visit the spot, see how the tree has grown and strengthened, and tell our little girl, now three, that this is a special tree planted just for her.  And now, and here your Sandals and Tofu Alarm will no doubt start sounding again, my second daughter's placenta is buried beneath it.

I had wanted to keep the placenta after my first daughter's birth, but sadly in the hiatus of a hospital forceps delivery, my request was forgotten, even by me.  However, when my second daughter was born far more peacefully at home, we did keep it, and stuck it in a bag in the deep freeze while we decided what, if anything, we wanted to do with it.  For a while there was a concern that it would be mistaken for a double helping of Beef Madras and get defrosted and served up for a Saturday night supper.  Eventually we had to do something, and so, feeling a bit silly, we set out to my first daughter's tree with a big spade and a plastic bag containing a human body part.  There was much sniggering.

My heroic partner dug the hole whilst muttering under his breath about women and life and the things you do for love.  I stood in a field with a toddler and a baby feeling like a lunatic and imagining him telling this story in the future with the final sentence being "...and that was when I knew it really was over".  We tipped the half defrosted contents of the bag into the hole, and, feeling almost embarrassed enough to jump in with it, I read this poem, 'Now that I am Forever with Child', by Audre Lorde:

How the days went
while you were blooming within me
I remember each upon each---
the swelling changed planes of my body
and how you first fluttered, then jumped
and I thought it was my heart.

How the days wound down
and the turning of winter
I recall, with you growing heavy
against the wind. I thought
now her hands
are formed, and her hair
has started to curl
now her teeth are done
now she sneezes.
Then the seed opened
I bore you one morning just before spring
My head rang like a fiery piston
my legs were towers between which
A new world was passing

Since then
I can only distinguish
one thread within running hours
You, flowing through selves
toward You.

As I read, my cynicism and feelings of awkwardness melted away.  I held my daughter close and said the words of the poem to her, and it didn't seem silly at all.  Rather it felt like a ritual should; a gathering together of emotions, a nod to the past and a raised glass to the future, a celebration of achievements, and an acknowledgement of shared humanity.