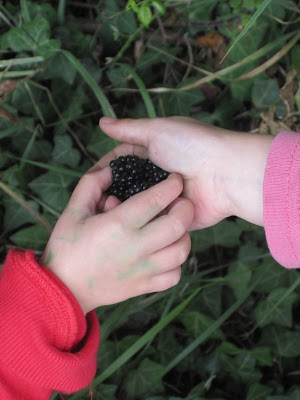 September brings return; of children to school, of darker evenings and log fires, of leaves to kick, puddles to jump in, and if, like me, you’re a parent of under four’s, the welcome comeback of the Toddler Group after the Summer break. When my first daughter was born, I was a bit sniffy about my local meet-up, wondering why I was supposed to enjoy drinking cheap instant coffee with a bunch of tired-eyed women I barely knew, until it slowly dawned on me that in this drafty hall was found the last available vestige of a social life, and I began to cling to the chance for weekly grown-up interaction like Leonardo to Kate’s raft in the icy waters of the North Atlantic.

September offers further compensation for the loss of Summer in the form of the humble blackberry. The three year old was enchanted, this time last year, by the sudden appearance of these sweet and abundant treats on the hedges, and our daily dog walks around the spidery network of lanes near our cottage became a feast of picking and eating that saw us coming home with over-flowing tupperwares and purple chins. Such was the impression it left, that she has mentioned it from time to time ever since, and the anticipation and excitement has been building to a frenzy since we began to notice the flowers turning to little green bobbles in early August.

And now the feast can begin, accompanied by an equally greedy one year old, who this time last year could only watch in puzzlement from the comfort of her sling as I reached and stretched for the best fruit and hoped her face was spared the scratch of brambles. Now they both eat, and I am Chief Picker, handing down berry after berry to eager hands, and wondering if any will actually make it home in our collecting pots, and if it really matters anyway, amidst all this joyful gluttony and giggling stained faces. 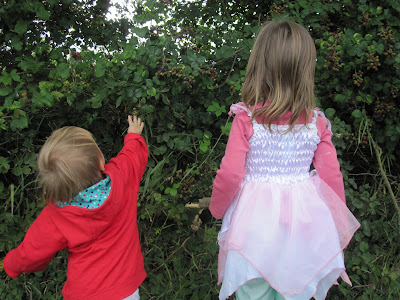 As they eat I spin a story about the birds who eat the berries we can’t reach and how they grow strong from the fruit but poo out the seeds and where the poo lands – splat (they like that bit) – another plant grows. They don’t seem to be really listening to most of it, but the three year old pauses and looks me in the eye as I say, “…and you came from a seed in my tummy, and I came from a seed in Grandma’s tummy, so you are my baby bramble and I am hers!”. Yeah yeah, I know it’s not A Level Biology, but I love the chance that playing in nature affords us to teach our children about life and death, birth and decay. From these hazy days in the lanes of Somerset, there comes a connectedness with our place in the bigger picture, a sort of ‘hedgerow spirituality’, and a knowledge of the cycle of life in which everything changes, and everything stays the same. Blackberries, toddler groups, and even lost social lives: they all come back around, eventually. Round here, this kind of information grows on trees.