'What's Good About This?': Reframing Our Post Baby Bodies

June 14, 2012
Children are natural visionaries, but life tends to whack this out of us as we grow up. Those people who are able to retain or rediscover their childlike ability to dream constantly and create unapologetically usually make a big and positive impact on the world. One such visionary was R.D.Laing, a Scottish psychiatrist, who published several works on 'madness' or 'psychosis' from the 1960's onwards. At a time when most people viewed mental illness as a shameful blight that was best kept hidden from view, Laing 'reframed' this, comparing episodes of mental ill health to a shamanic journey, from which it was possible to return a wiser or more insightful person. "Madness need not be all breakdown. It may also be break-through", he said, and he even famously suggested to a patient with chronic catatonia, 'I hear you are very good at sitting still, have you thought about getting work as a life model?'. This she did, and through seeing her condition in a positive way, she was, paradoxically, able to recover from it. In a time when most doctors were asking, 'What's the problem?', Laing instead posed the question: 'What's good about this?'

What's good about this? What's good about this? I've been asking this question myself recently whilst packing for a holiday and being forced to try on a variety of bikini's, tankini's and swimsuits I've got shoved at the bottom of my sock drawer, most of them purchased in a state of pre-baby body confidence I took entirely for granted. I've already written about my post-natal 'melty down tum' here, and my desire to make my peace with it, but I'll admit, standing in front of the mirror this week looking like an elephant in a handkerchief factory, I felt I had a long way to go yet. But who can blame my insecurities, when the news seems to be constantly full of stories about celebrities regaining their six packs just weeks after giving birth? Just this week, we've seen Michelle Heaton (lost the weight), Jessica Simpson (trying to lose it), and Bollywood star Aishwarya Rai leaving critics perplexed (not losing it, not trying). Each week, the names are different but the stories the same: they got their pre baby body back, or they didn't. I didn't.
Aishwarya Rai has been accused of 'betraying her country' by failing her 'duty to look good and fit'. Cinema professor Shohini Ghosh has commented: 'There is a glorification of motherhood in India and Indian cinema. But people are confused because they don’t know whether to glorify Aishwarya in her new motherhood or lament that she is not looking like a runway model.' I know how they feel. Part of me wants very much to celebrate my body and it's earthy curves that brought forth my two beautiful daughters. But part of me laments, yes, laments is a good word, the loss of my 'Ta-Da' beach and bedroom bod, and constantly feels the pressure to erase the evidence of pregnancy from my appearance. Rain and sunshine, sunshine and rain...
A few days ago I was just getting into the bath with my visionary four year old and I noticed her looking at my tummy. 'What do you think of it?', I asked her. 'I think', she said with her usual careful nonchalance, 'I think it looks like an upside-down rainbow.' An upside-down rainbow. R.D.Laing would be proud of this perfect reframing, this ability to look at the world with optimism and wonder, and to find beauty in unlikely places. To me the rainbow seemed just the right image, and I won't be able to look at my tummy again without seeing it there, or thinking of her, or her sister, or the thunderclaps and sudden sunshine of pregnancy, birth and motherhood. As usual, my daughter inspires me, and I resolve to try harder to remain oblivious - like her, and R.D.Laing - to the norm, the flow, the status quo - and instead reframe the world with the simple question, 'What's good about this?'. 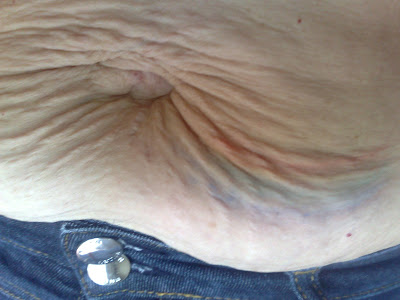