Creating a Ritual for Weaning at Four

October 04, 2012
I'm aware that the title of this post makes me sound a bit whacky, and, to be honest, I quite like that. I'm hoping you've already got a mental picture of me, hair matted, eyes rolling, dancing naked around a ceremonial fire with my tits swinging in the breeze. Or perhaps, worse still, you've got me eyeing the camera sexily as my daughter stands on a chair for a bit of 'extreme nursing'. Of course, none of it was really like that.

Let me tell you the actual story.

Like most mothers who breastfeed beyond one, or two, or three, I didn't set out with that plan, it just happened. My daughter loved nursing, and so did I, well, most of the time, and when I didn't, I loved her, and could see that she loved it, so kept going anyway. In many ways, nursing a child who no longer needs you as their main source of nutrition is easy, compared to the frantic dependency of babyhood. It becomes more flexible, more negotiable: a mutual loving experience that is almost entirely about comfort, which can only be a good thing.

And so we went on. Through her first year, her second, through my next pregnancy, and then 'tandem' nursing with her baby sister for another year and a half. Like many other aspects of motherhood, nursing two children together contained some of the most exquisitely lovely and darkly terrible moments imaginable. At times, I wished I had weaned her before she even knew of her sister's existence. Having two such dependent creatures felt stressful, fraught, tearful, claustrophobic, irritating, draining. And then they would nurse together, and silently lock eyes, finding each others hands and holding them across my body without breaking for a second their deep sisterly gaze.

In the year she was three the nursing sessions began to diminish and just one feed a day became a comforting part of the bedtime routine. Some days it would feel like a chore for me, already tired from nursing her sister to sleep, and I would be secretly glad on the nights she fell asleep with her dad and we skipped our 'boobie'. As we moved towards her fourth birthday, we were only nursing about three times a week. And then something funny happened, that I hadn't anticipated. She stopped being able to do it. She told me, 'Mummy, I can't - I can't get the milk to come out!'.

Unusually, I couldn't seem to find any information online, so I posted in a forum. 'Yes! This happens', came the response. Apparently (and this is anecdotal evidence so I can't give you a reference!), a combination of a growing jaw and less frequent nursing sessions can mean that a child loses their ability to latch on, and can no longer get you to 'let down'. I was surprised to hear this, and also slightly relieved, as I felt ready to stop, and this seemed like a bit of a 'deus ex machina', an intervention by fate that took the onus off either of us to decide it was time to wean.

My daughter, of course, was less impressed by the news, but we had already talked a lot about weaning, so she was not completely unprepared. In her sadness, she suddenly had an idea. She remembered that 'babies who can't have boobie have a bottle instead', and asked if I would get some of my milk out and give it to her in a bottle instead! I agreed to try, if only to give her the message that I cared about how sad she was feeling. We sat by the fire with an old breast pump I had lurking in the cupboard, and I gave it my best shot, but I was just as useless at expressing as I had been when she was a baby, and only got out about half a teaspoon. At this point it was my turn to cry, holding her and repeating how sorry I was that we couldn't nurse any more.

Typically, my partner read the situation at a more practical level, and got busy in the kitchen with a baby bottle, which he filled with cows milk, sugar and horlicks, telling her it was 'formula'. She was thrilled to bits with this, and still asks for it now sometimes. I, on the other hand, wasn't so easily comforted, and suddenly felt nostalgic for her lost babyhood and reluctant to move forward into the next phase of life. It was then that I remembered Ritual.

Across cultures and throughout recorded time, humans have created and participated in ritual to mark and celebrate pivotal moments in life. In today's world, many of us are no longer religious, taking part in hardly any rituals apart from the odd wedding or funeral, and I think we feel it's absence, a sort of 'ritual shaped hole' existing deep in our psyches. Ritual brings meaning to times of transition and change, it is a way of pausing to decorate the threshold between one phase of life and the next, rather than simply rushing forwards and paying no attention or respect to past, present or future. Like roses around a doorway, ritual is at once utterly pointless and fundamentally significant, a beautiful and life enhancing waste of time.

So I made one for our daughter. We set off on a wintry day to a field where we had planted a tree when she was born. I carried a little bag containing two beautiful bracelets, sent to me along with a candle and a little sachet of dried herbs by a wonderful blogger and artist in America called Susan Betke. My partner carried a bluebell and a big spade. We invited my daughter's best friend and her parents to what became known as a 'Weaning Party'. Oh, and there were chocolate eggs. 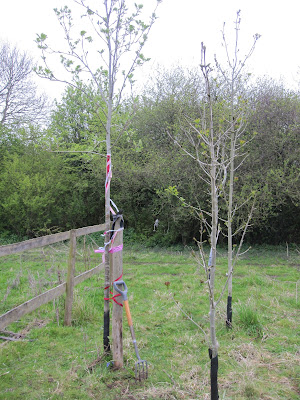 In the cold field we planted the bluebell under her tree and I noted that it had four flowers, one for each year of her nursing. I gave her a bracelet and put on a matching one myself. We stood around the tree and the children ate chocolate. After the planting, I gave them some ribbons to decorate the tree and the children spontaneously declared this a 'May Pole', twisting the ribbons in patterns as they danced around. We lit a little camp fire and my daughter thoughtfully went back to her tree alone and sprinkled it with herbs. The whole affair was understated but everyone in their own way seemed to enjoy filling their 'ritual shaped hole'. Then we went to the pub.

That was over six months ago. In the past few weeks my little nurseling has started school, and it's not insignificant that I've chosen this particular moment to finally take the time to write about our weaning. As she disappears each day into her new world, I find myself on another threshold, and am often consumed with the usual human reluctance to cross over to the next phase of life. In purely selfish moments, I want my baby back, and long to run into the school and scoop her up and take her home. But of course, she is not 'my' baby; she does not, and never has, 'belonged' to me, and my task now is to make the transition with grace and celebration; to decorate the doorway rather than keep banging my head on it. Perhaps a return visit to our tree is needed, or at very least, a trip to the pub. 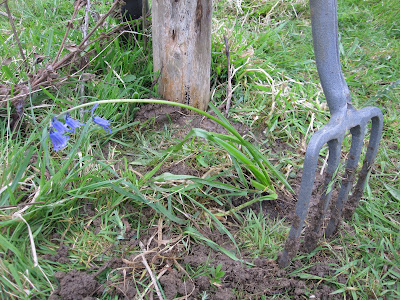