Should We Be So Very Scared of Giving Birth?


This article has now been published in the Huffington Post.


Tapping into the twenty first century zeitgeist is easy, and a bit fun - you just have to tap into Google. For example, enter ‘very scared of’ … and you’ll see the top four things that people are very scared of, right now, like this:

Many women are scared, afraid, terrified of giving birth. Some – as many as one in ten – suffer from Tocophobia, a morbid fear of giving birth that leads them to seek elective caesarians if they can. Others, while they may not have a diagnosable psychological disorder, are still extremely anxious and fearful about the task of bringing their baby into the world.

It’s not really surprising that so many women feel this way. The media portrayal of birth ranges from the rather ridiculous soap opera version – 'woman looking terrified and sweaty delivers baby in pub drama' – to programs like One Born Every Minute – 'woman looking terrified and sweaty begs for drugs in hospital drama'. Birth education in schools is woefully lacking and standard ante-natal input is often focused on what your options are if you cannot cope. Is it any wonder we’re all 'very scared'?

Ironically, going into labour feeling extremely afraid can actually increase your chances of having a difficult or even traumatic experience. Not only can fear increase tension which in turn makes birth more painful, but approaching birth with negative expectations can lead to a more ready acceptance of medical interventions, which usually serve to increase rather than remove any discomfort or trauma. All these frightened women (and I was one of them once) end up getting the experience they both expected and dreaded – the  prophecy is fulfilled, fear becomes fact: 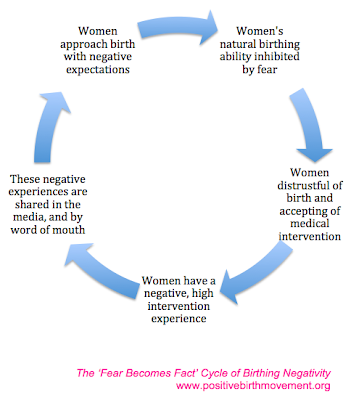 Is there any real justification for fear of giving birth? As well as the current negative media portrayal, there is an accompanying widely held belief that childbirth is dangerous, and that we should all be grateful for modern obstetrics, because, before it was invented, ‘women used to die’. But this is an oversimplification of a complex historical issue – many women used to (and in many parts of the world, still do) die in childbirth, not because of their bodies are poorly designed for birthing, but due to poor maternal health, poor diet and most of all poor hygiene. In the 19th century, over half of all deaths in childbirth were caused by Child-Bed Fever, a direct result of doctors simply not washing their hands.

The statistics we have on Western maternal mortality show a sharp increase in the early 1900’s, peaking in the 1930’s, in direct correlation to increased medical intervention such as botched caesarians and badly administered drugs. But the largest killer was always infection, often caused by doctors going from woman to woman and even from mortuary to birthing room, and this only subsided with the invention of drugs to fight it. Turning to the modern day, the country with the most medicalised model of childbirth, the USA, has seen rates of maternal morbidity double in the past 25 years.

In some cases, modern obstetrics saves lives, there is no doubt about that. The difficulty, for Western birthing women and no doubt their doctors too, is achieving some clarity about which cases are in actual need of medical help, and which would be best left alone. This, along with the conundrum of whether fear itself, and birthing in an environment not suited to our mammalian selves, is actually causing some of the hold-ups and struggles in modern labours, is a difficult and confusing tangle for us all to unpick, especially when you are nine months pregnant, or worse still, nine centimetres dilated.

In this complex environment, women are coming together to try to improve and inform their birth choices, and maximise their chances of a positive birth experience. In many ways, there has never been a better time to be pregnant - antenatal education has moved on from panting and plastic pelvises, and there now exists a whole host of vibrant groups offering everything from the latest information about evidence based care, to campaigns for birthing rights, for example The Birth I Want, One World Birth, One Born Every Minute - The Truth, and Tell Me A Good Birth Story.

I recently founded The Positive Birth Movement, a grass roots organisation aiming to spread positivity about childbirth via a network of free to access antenatal groups, linked up by social media. Within six weeks of launching we have over 30 UK groups and another 15 as far afield as New Zealand, Turkey, Germany, South Africa and the States. We believe that every woman deserves a positive birth – and that this doesn’t always have to be 'natural', but rather that:

The enemy of fear has always been information and communication. If you are worried about giving birth, you are not alone. Join The Positive Birth Movement on Facebook or visit our website for more information.

Childbirth Without Fear by Grantly Dick-Read and Birth: A History by Tina Cassidy were helpful to me as I wrote this article.