Stop Googling Your Birth Options, And Hop Up On The Bed, Dear 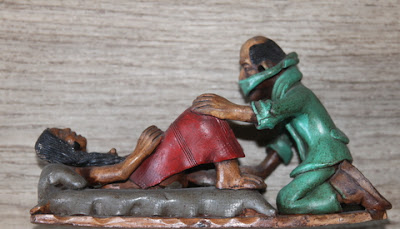 Here's something every pregnant woman might like to know: during labour, you will be given a routine vaginal exam every four hours, and this will be used to check your cervical dilation, and to chart your progress. Your midwife might mention this at your antenatal appointments, but here's what she probably won't tell you - the exams are optional, you can refuse them, and unless there seems to be a problem or you actually want to know how dilated you are, it's probably better that you do, since this invasion of your privacy can actually bring you out of your Labourland trance, making your 'mammalian self' feel threatened and slowing or halting the very progress they are trying to check.

Learning about the various procedures, such as 'V.E's', that are likely to take place during your labour and birth can help you to make truly informed decisions about whether to accept or refuse them. It can allow you to think about the kind of labour you really want, and empower you to know your rights and take control of the experience, giving you a feeling of ownership and satisfaction, regardless of the way you ultimately birth your baby. There is a wealth of information available now to pregnant women, in particular thanks to the internet, and at the touch of a button you can inform yourself, and discuss your plans and concerns with other women who have 'been there, done that'.

Brilliant, right? What's not to like about this? Surely those concerned with the care of birthing women must be thrilled that some of them are actually taking an interest in what happens to them, and - often literally - getting off their backs and taking an active role in their labours? You would hope so, and yet Terri Coates, a practicing midwife, lecturer in Midwifery, and clinical editor to Call the Midwife, doesn't seem to be in favour of it in this interview from Tuesday's Mail:

"A lot of young women in the 1950s didn’t even know where babies came from. They were happy to have someone lead them and were more deferential. Now women are far more savvy, have apps on their phones, mum-and-baby books, better education. They know what they want and how to get it. Managing their expectations is like walking a tightrope. They expect the perfect birth, the kind they see in magazine pictures. Some feel that if they have anything but a drug-free birth, they’ve failed. But if they end up with a healthy baby, they’ve done extremely well."

So - the modern and informed woman is making life difficult for the professionals who have to 'manage her expectations'. Terri Coates seems to suggest that our access to information is encouraging us to set our sights too high, and she trots out the patronising and tired old idea that we should all be happy with a healthy baby. This attitude completely dismisses the mother's birth experience, and is often most painful to those of us who experience birth trauma, making us feel that we should stop complaining and be grateful that everyone simply survived.

As Elizabeth Prochaska, founder of Birthrights, the new UK organisation dedicated to promoting human rights in childbirth, puts it:

"What's worrying is an increasing tendency for healthcare practitioners to view the mother as simply a vessel for the production of her foetus, and to say “as long as you get a healthy baby and a live mother out of it that's all that matters". But it's not all that matters. Look at the cost to the healthcare system of women with serious disorders post-childbirth...The rise of post-traumatic stress disorder and post-natal depression are problems, too."


Women who have been traumatised are finding their voice, as in this recent article, in which several women, including Toni Harman from One World Birth, speak about the terrible treatment they suffered during labour and birth, including being shouted at, having their wishes ignored or belittled, and feeling as if they were being raped.

However, commenting on their stories, Dr Gedis Grudzinskas, a former professor of obstetrics and gynaecology at St Barts Hospital, London, seems unmoved. It seems he agrees with Terri Coates - we women are getting our hopes up too high:

"There's a world of diminishing resources but increasing expectations from mothers-to-be. Labour is an all-consuming process, and discussion can be very difficult because you might only have one-and-a-half minutes between contractions. So there may be a perception of doctors and midwives being too assertive - therefore bullying - but they have the patients' best interests at heart."

Our hopes are too high - we expect silly things like a decent shot at the birth we really want, and if that turns out not to be possible, for professionals to talk to us and touch our bodies kindly and with respect.

Grudzinskas also echoes Terri Coates yearning for the good old days, when women - apparently - just did what they were told without question, and the dangerous technology of the internet was not at their disposal:

"In the old days, women referred to doctors as experts. Now, many women think they're well-read because they've done research on the internet. But much of that information isn't correct."

Birth guru Sheila Kitzinger takes on this attitude in her excellent new book, Birth and Sex:

"An obstetrician once snapped at me that he couldn't stand 'back seat drivers'. He meant women who had ideas about what they wanted in childbirth."

And, with the usual twinkle in her eye, she tells this story:

"One obstetrician in a major teaching hospital where one in four women had a Caesarean was pleased that there is 'increasing maternal input into childbirth'. It is not clear what he means by this. Women have always had a lot of 'maternal input'. Doctors could not produce babies without them."

Women - with the help of the internet and all of the information and communication that it brings, are taking back childbirth. Slowly, ever so slowly, the balance of power is shifting, and it is this that is causing some professionals to feel uneasy and long for a time when women would defer to their expertise, not ask so many questions, and comply.

If a woman declines vaginal exams in labour, this is likely to make things a lot easier and more enjoyable for her, but have the opposite effect for her carers. They will have to rely on other methods (and skills that they may not have) to make their assessments. They will not be able to chart her dilation on a partogram. If they can't do this, they won't be able to fully assess her 'progress' or lack of it, and follow their usual procedures and protocols according to the clock. They might even have to behave like the midwifes 'in the old days' as Dr Grudzinskas would put it, and, putting down their clipboards, turn their eyes to the woman as the most powerful and knowing figure in the room.

Water birth, pronounced risky by some doctors, has a similar effect of restoring power to the woman at the expense of those who attend her. As Marsden Wagner, director of Maternal and Child Health for the World Health Organisation for fifteen years, puts it in Water Birth Unplugged:

If you are faced with a choice about procedures and interventions in childbirth - ask yourself - who is this most likely to benefit, reassure, or make comfortable - me, or my carers? We must not be deterred from learning as much as we can about our rights and our options in childbirth, no matter how much it may inconvenience midwives or doctors. We do not have to comply with their suggestions, unless we wish to. We are allowed to be powerful in childbirth. Whatsmore, birth is not simply a means to an end - our birth experience matters, and is of primary importance, not just to us, but to our babies, our families, and the whole human race.