Cut Me Open or Send Me Home: The Lottery of Maternity Care 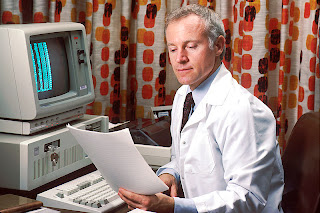 Pregnant women are offered medical interventions so often that it's almost hard to imagine getting through an entire pregnancy and birth without having one. Whether it's injections, induction, or an intravenous drip, there are so many choices for women to make, and often they feel, quite understandably, that the best choice is to place their trust in the experts, who are, after all, offering them 'evidence based care'.

But if midwives and obstetricians are offering 'evidence based care' - that is to say, they are making their recommendations based on good quality research - why then does the advice that individual clinicians offer, and the policies that individual hospitals and trusts implement, vary so greatly?

A new report from the Royal College of Obstetricians and Gynaecologists (RCOG) suggests that the disparity between hospital statistics has finally come to their attention, although I'm not clear why it has taken them so long to notice information that has been available on sites like BirthChoiceUK for years?

RCOG points out, for example, that in one hospital the induction rate is 38%, in another, 17%. Emergency caesarean rates vary from 20 to 40%, and forceps from 16% in one unit to 38% in another. Of course, the evidence here is clear and hard to ignore: not all interventions are necessary, and a whole lot of women are having traumatic and unpleasant birth experiences that could have been avoided.

It's great to see a giant like RCOG admit that there are failings. One would hope that this is a big step towards positive change, with a promise that in the future doctors will have their individual stats compared to national averages, and be asked to explain any great deviations.

But - for now at least - it doesn't necessarily help the pregnant woman on the front line. It's all very well to number crunch and compare stats. But when you are carrying a precious child within you, or are even perhaps in the middle of birthing them, and the professionals in whom you are placing your trust start talking about 'increased risk', it's difficult to ignore them. You might be one of the thousands of women who are being offered intervention that isn't really necessary, but what if you're not? Do you really want to be the woman who takes a stand, only to discover - too late - that, this time, the doctors were right?

Let's say, for example, you are over forty years old. In one hospital you might be told you 'need' to have your labour induced on your due date, because of an increased risk of stillbirth. However, in a different hospital, induction on the grounds of your age would not even be mentioned and you would be treated the same as any other woman.

If you're under the care of the hospital who routinely induce older women at 40 weeks, you face a dilemma. Who do you believe? Who do you trust? Stillbirth is a powerful word. Can you ignore this advice? Whatsmore, do you even realise that there are women just like you only a few miles down the road who are not even being told they need induction and who are not even having to consider this horrible dilemma?

Induction advice in general seems to vary greatly from hospital to hospital, with some women reporting 'prodding', 'harrassment' and 'shroud waving', from around 38 weeks, while others sail past their due dates and even past 42 weeks without too much concern. Women under pressure feel they should perhaps listen to the experts - but how can such widely differing policies be 'evidence based practice'?

Last week I went to meet the Ob myself. Due to my second baby being over ten pounds at birth, there were concerns raised at my booking in appointment for baby number 3. I was told I would need consultant led care, regular growth scans, and induction at 38 weeks. Since that booking appointment I've switched to an Independent Midwife, but kept my Ob appointment, mainly out of curiosity. I wanted to hear what he had to say, for myself, and for all the other women who presumably get similar referrals after 'big babies'.

I took the morning off from looking after my two year old, and, along with Tara my midwife, went to the hospital, armed with a bundle of papers including scribbled stats about dating scans and induction for 'suspected macrosomia' (big babies), many of which I gleaned from this wonderful blog post. Me and Tara had about an hour to wait, and, quite frankly, by the time I was face to face with the man in the suit, I was a little bit hungry, and spoiling for a fight.

Imagine my disappointment when the utterly charming Ob said, "There is nothing wrong with you, you are perfectly healthy, and you pushed out a ten pound baby no problem. Why are you here?!"

Across the hall, the Ob we didn't get to meet was holding his clinic. Insider info told me that he 'didn't believe in vaginal birth', and had insisted his own wife had an elective section. I couldn't help feeling slightly cheated that I hadn't got to read my stats to him, or tell him in detail about my five minute drug free second stage, maybe whilst Tara sat on his chest. 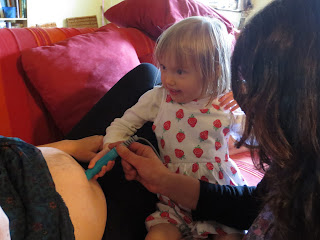 We drove home for soup and an antenatal check up on the sofa, half giggling, half wondering - what happened? Why was he so laid back, when we both personally knew women who had been put under tremendous pressure to be induced for 'big babies'? Conspiracy theories were offered - had he been reading my blog?! I asked on my facebook page - what were other women's experiences in a similar situation, and I've been flooded with responses.

Looking at the stories I've been sent, one thing is clear. There is no uniformity. There is no evidence based care. Some women encountered no negativity at all, some were induced at 38 weeks, some were made to get out of the birth pool to push, others were given the OK for a home water birth, some were not 'allowed' to birth at home, some were advised to have an early epidural.

Like all of these women, my maternity care was not evidence based, it was pot luck. I'm told my Ob was 'one of the good guys'. I could have had the man across the hall. I might not have had a confident midwife to back me up. I might have felt scared of birthing a big baby. I might have agreed to regular scans and early induction. I might not have realised that what I was getting was 'personal opinion' dressed up as 'evidence based medical advice'.

This might seem like a desperate situation, but actually, I think it's largely positive. Things are changing. If RCOG themselves are noticing and publicly admitting that, "We cannot be sure that every woman is getting the best possible care," this has got to be a step in the right direction.

What's needed now is for more women to take the power back into their own hands. Realise that even the professionals themselves are acknowledging failings. Ask more questions. Get second opinions. Use the internet, forums, facebook groups and Positive Birth groups to talk to other women and hear their stories. Take responsibility, take time to think; get informed, and do not place blind faith in professionals. Above all, abandon any expectations of evidence based care. Because it simply does not exist.