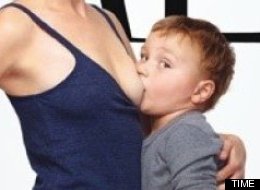 I've just had an article published on the Huffington Post - a look at the huge reaction to the Time Mag cover of Jamie Lynne Grumet breastfeeding her son. I try to explore some of the reasons why many people have responded with such disgust and hatred towards her, and ask...would they be this angry if they had been attachment parented?

Click here to read the article on the Huff, or read it below.

‘Never wrestle with a pig’, a friend advised, when I suggested I might add my voice to the chorus of commentary that has followed the now infamous Time magazine cover shot of Jamie Lynne Grumet .. ‘You both get dirty, and the pig likes it’. I took her point. ‘Those bastard commenters,’ she added. ‘It won’t matter how well you write or what you say, all they’ll hear is that you breastfed your daughter til she was four, and savage you.’ Til she was FOUR? I hear you cry. Yes, you heard correctly. Now run along, off you go, dismissed. Skip to the end. Begin your savaging.


Still here? OK – here’s the pig. A mother allows herself to be photographed for the cover of Time, breastfeeding her three year old son, presumably in the spirit of breaking down barriers and encouraging greater freedom of choice. And how does the world respond to such a pioneer? ‘Highly disturbing’, ‘Disgusting’, ‘Unnatural’, ‘Abusive’ – to name just a few of the more repeatable names she has been called this week.  Criticism of her action has ranged from a high profile mocking on Saturday Night Live, to the usual low blows in the comments sections of the many online articles responding to the story.
A lot a lot a lot of people just didn’t like this image. But just what is it about nursing toddlers, and about attachment parenting, that quite clearly bothers them so much? Some of it seems to stem from the fact that many people don’t understand what Attachment Parenting actually is, but are happy to oppose it anyway. There has been a lot of amusing misconception this week involving feckless lazy hippy mothers breastfeeding their kids through the college railings and such like.
Another reason, perhaps, is that as soon as anyone starts promoting one parenting style, there’s an automatic implication that others who are not following this approach are somehow ‘getting it wrong’. People get defensive, and don’t like to think they are making bad choices for the people they love. The ‘Mummy Wars’ start, solidarity is abandoned, and everyone forgets that, as long as a few basics are met, there isn’t really a ‘right’ or ‘wrong’, there is just different. But does a bit of misinformed anxiety explain all the Grumet-bashing, or does it go deeper than this?
Mankind has a long history of being Anti-Attachment. Throughout time and across the globe, many cultures have found ways to disrupt the mother infant bond. From superstitions about mother’s milk and colostrum, to hospital night nurseries and beyond, people have always sought to drive a wedge between mother and babe, to put a dampener on this ultimate love affair. Why would they do this? Because attachment encourages mothers to treat their children with love, respect and empathy, which helps to create people who are loving, respectful and empathic, and loving, respectful and empathic people don’t make good fighters. Or possibly even bankers and politicians. Either way, it’s a tribal survival thang.
But being raised with warrior enhancing tough love comes with a price. You don’t have to look too far in this world to find someone who has low self esteem, who can’t be good to themself, or who finds it difficult to maintain positive relationships. Unfortunately you also don’t have to search very hard to find people who are angry, aggressive, and lacking in empathy, gentleness, kindness. Plenty of them have been out and about this week, accusing Jamie Lynne Grumet of being a child molester and a freak because she dared to admit that she snuggles her child to sleep at her breast, that she isn’t afraid to swim against the cultural tide, and that she loves her children without limits. It begs the question, if these people had had a mother like Grumet, would they still be so angry and cruel? 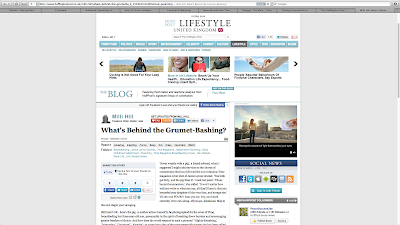